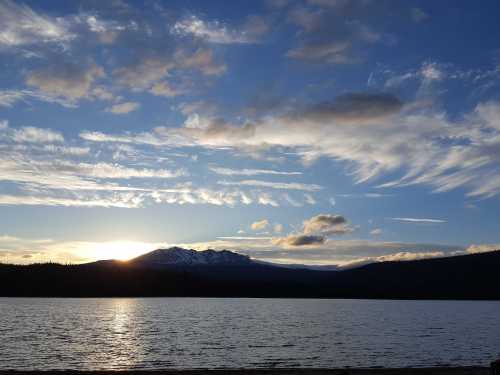 Hey all! We just got back from another camping trip. I love camping with the kids, and this last week, I was very excited to take the kids up to Crescent Lake, a small lake near the blip of a town called Crescent, Oregon.

Crescent, Oregon is near what is known as Central Oregon. If you are driving east, the town is about 10-15 minutes of driving past the summit where the Willamette Pass ski area is located.

The lake is not what I would call “remote.” It is far from official civilization, but close enough to Crescent that you could drive in daily to get ice (or even order takeout).

There are only a few campgrounds on Crescent Lake, though there are also cabins, private dwellings, group sites, and some campgrounds away from the lake itself.

Not too many campgrounds to choose from

We actually walked down to Contorta Flat from Spring (there is a really pretty trail connecting the two campgrounds), and the place was full of RVs and campers and motorcycles and dirt bikes and side by sides and people blasting music and playing cornhole and more. It was overwhelming. I wouldn’t stay there when it was full. But when it is empty, it is a really wonderful, quiet, campground that I highly recommended.

Spring is just down the road, but it is so much more calm. The campground has about 70 sites, but they are spread out over a much larger footprint. The site we got (52) was HUGE…..it was easily the size of 5-6 sites over at Contorta Flat.

Each Trip With Kids is Different

And how was it?

Well, camping with young children is fun, but also a pretty big challenge. I tend to pack as light as possible, because otherwise packing is a two week ordeal. I don’t cook extravagantly like some people do, and I tend to just make basics from the food groups rather than making meals. I don’t pack tons of toys, and encourage the kids to make friends in the campground, and to utilize the natural area as “toys.”

Here’s the thing: little kids don’t help put up tents, make fires, cook, clean up, even though they might want to help you. So I worked my rear end off for the four days that we were there.

The environment challenged us this time, more than our trip from a few weeks ago to the North Fork of the Willamette (above Westfir). The mosquitoes were fierce this time, and nothing short of DEET helped keep them away.

The Mosquitoes at Crescent Lake Are Bad Until Early August

Even with repellent and other measures, we all got bitten multiple times, especially the littlest one, because she did nothing to try and keep the bugs away, and consistently stripped off the layers I put on her to keep her skin safe. We ended up planning to eat dinner early and then get into the tents early, at about sundown, and then in the morning, stayed in the tents until the sun got high enough for the mosquitoes to die down.

The wind was also bad this time. I have been up to Crescent Lake a lot of times during the month of July, and while it tends to get windy in the afternoon, it generally isn’t too bad in the morning or early evening. This trip? The wind screamed from sunup to sundown.

This was great for the mosquitoes, but it was really brutal down by the lake for my two-year old. She got very over stimulated by the sun, wind, water, noise, heat, etc. She was really whiny on the lake beach and wanted to hide on my lap underneath my sweatshirt or a towel more often that I would have liked.

Water Sports Are A Big Deal

Most of the people who come to Crescent Lake bring kayaks, stand-up-paddle boards, rafts, or some other flotation device to enjoy. The wind was a real bummer for almost everyone, because it made it really difficult to use any of these devices.

The temp was good during the day, in the high 80s and didn’t get too cold at night, nothing below the upper 40s. It was about 10-15 degrees cooler down by the water than it was in the campsite. I have camped there in July with temps up over 100 degrees, so I was pretty happy with the 80s.

The lake is not terribly warm, but it is generally not deep at the shores of the campgrounds, so parents don’t have to worry every second about drowning. I was able to sit in a chair and read my book, with one eye on the kids instead of standing over them every second to keep them alive.

The chipmunks were very aggressive and numerous this year. We had to put all food away when we weren’t using it, and not just at night. The critters climbed into the pantry food box, stole food off the table while we were sitting at it, opened bags, chewed holes in garbage bags, and were a general menace.

Since we do not have a dog, the kids got a kick out of chasing the chipmunks away from the site, yelling at them (I am sure our neighbors, when we had some, enjoyed that).

While everything is obviously very dry (starting a fire was no trouble at all), fire danger had not yet taken hold and we were able to have a fire, roast hot dogs and marshmallows, and use the smoke from the fire to battle mosquitoes.

What else did we do? We rode bikes and scooters. The boys caught hundreds of frogs (they had all recently turned from tadpoles to little froggies) and then released them. Seriously, hundreds. We saw birds dive for fish, and got to ride in the boat (and break the boat, but that is another story). We read a little, ate a lot, met up with some friends, slept in the tents.

But I have to be honest, we threw in the towel a day early. The mosquitoes and the wind just did us in. My eldest son was the only one really having any fun. My daughter was very whiny the last day, and my middle son spent most of the last day hiding out in the pickup.

(Funny enough, he decided to be helpful, and wash the insides of the windows. With essential oils.)

The experience hasn’t made me less excited about camping again this summer. But I am excited about figuring out some new places to set up camp, and I’m currently doing research on locations in central Oregon, and off the Cascades Highway (Cultus Lake, Elk Lake, Davis Lake, etc).

All in all, I recommend Crescent Lake as a place to camp with kids. I have a feeling that we will go back in 2020.

Have you been to Crescent Lake with kids? Or are you thinking of going? Let us know your questions in the comments section below.

Emilia Gardner is a full time mom and a most of the time blogger (when it fits in). She has three kids and they are awesome. She contributes regularly to MomAdviceLine.com on issues related to parents and children, and whatever else seems to be bouncing around her head.