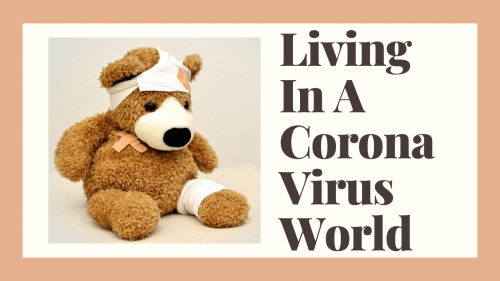 Alright everyone, I’m going to try and blog about our experiences in this coronavirus pandemic daily, if I can. This traffic to this site is minimal right now (it’s a newer blog), so I doubt many people will read it. But at least it will serve as a journal of how this all went, and I’ll be able to look back and hopefully laugh about some of the things that we thought, did, and said.

I live in the Pacific Northwest of the United States.

I have three children, and I live in a small suburban town of less than 10,000 people, within 15 miles of a larger city.

Well, for the last few weeks, the politicians have been sparring and juking and jivving about what’s really happening and who is supposed to do what. I don’t really know what’s happening at the executive or legislative levels or our government.

What most states are seeing (as we are in in our state) is the the state governments have been much more proactive about trying to get ready to combat the spread of the virus.

At this point, while the federal government is still working out getting tests and people tested, the rest of us are just assuming that there are positive cases in our communities. At this point, the existence of a test or not here doesn’t really matter all that much in the scheme of things. People can be walking around healthy with the virus, so they aren’t people that would seek out a test anyway.

Americans in general are not very good at dealing with stress or being told what to do. When those two things come in one package, people start coming off the rails.

Right now, our government has banned by executive order gatherings of more than 250 people, and closed the schools.

We can still leave our homes and go about our business, and businesses are still open for business.

But people are being asked to remain home if possible, and to avoid mingling with other people.

Countries around the world are in worse shape than we are, and are using the military to keep people at home.

So far, there’s been no public discussion of any sort of martial law.

But I do expect there to be additional executive controls and orders coming at the state and federal level.

Specifically, I think we’ll probably see domestic flights being shut down for a series of weeks, and the possibility that state border crossings might even be closed.

While we Americans are familiar with the grounding of airplanes scenario (post 9/11), there has never been in my lifetime an instance where state borders were closed.

How does this impact my family?

Luckily, my family members and I are in very good health, for the most part. My children are healthy, as am I. No diabetes, immuno-issues, or other vulnerabilities.

My grandmother is 90 years old, living independently in a town of about 2000 people about 90 minutes from me. She suffers from some lung issues. I do fear for her, and what would happen if she contracted the virus. It is hard for me to imagine her being in the hospital and me being unable to go see her, even if she was dying.

My family has advised her to remain home, and to avoid grocery stores and other gatherings. I am a lot like my grandmother…fiercely independent, pretty stubborn, and not always all that smart.

I hope my grandmother heeds the recommendations of all her children and grandchildren and stays home for a while, to let the worst of this virus pass her by.

For my primary nuclear family, the most visible impact for us is that the schools are closed. I have been doing some brainstorming about keeping the kids occupied during the Corona School shutdown and I’m planning on taking the kids to do some really fun outdoor activities as long as the government doesn’t stop us.

I’m pretty sure my family has already gotten the virus at least once. We went to visit my sister in Seattle at the end of 2019, and within a few weeks after that, a few of us were sick with a virus that involved a fever and a cough, with a sore throat. This sounds a lot like the coronavirus.

And considering that we were hanging out in Kirkland (which seemed like the epicenter in the initial US outbreak), going to grocery stores, the community saltwater pool in Burien, and participating in a fun but very crowded tamale making party…the odds are good that we got the virus and then brought it home with us without even realizing it.

I can’t feel guilty about it, I had no idea back then that it was really a thing.

Fear is driving most of us

People are scared. While we are used to going to war around the world, we don’t have any experience with fighting against a virus like this. I mean, there was SARS and H1N1 and we deal with the seasonable flu each year, but this is different.

We don’t have any protocols in place like many of the countries in Asia do. There are almost no supplies, and most people do not have food/supplies in their home to hunker down for a bit.

But instead of going to the store to get a reasonable amount of food and supplies, people are just buying as much as they can carry and pretty much hoarding it. This makes it really difficult for everyone to get what they need. I fear that much of what was bought in the last 4-5 days will be wasted and ultimately thrown away.

My mother (who I love dearly) is freaking out, reading the news constantly. She is obsessively wiping everything with bleach wipes, washing everything, and calling everyone she can think of to talk to them about the virus.

But goodness people! We are seeing the positive impacts of simple social distancing in other countries around the world, which happened without riots, mass looting, or the need to “bug-out” and hide in the mountains.

This isn’t the end of times. And the most you act like it is, the more you hoard and freak out, the worse the overall panic in the community becomes.

Everyone just needs to get off their Facebook and focus on spending quality time with the family members who are also trapped at home with them.

People don’t trust the government or the media

The other thing that we have to confront in America is that there has never been, in our living lifetimes, a virulent disease that we couldn’t just take care of with antibiotics. There’s almost no one left alive who survived the Spanish Flu pandemic. People are so distrustful of the media and the government that they’ll have to have some sort of personal experience with the virus before they’ll believe that it is real and that they should act.

The people in Asia need no more reassurances now. They’ve already suffered through multiple viruses in their countries over the years, and seen the impact and deaths because of viruses like this one.

I’m afraid that we’ll need to have some sort of disaster happen before everyone unifies and gets on board with the need for social distance.

Do I believe that the threat of corona is real?

I do. But not because I am hearing it from politicians or news outlets. I am hearing from medical professionals and scientists from all around the world. From people who are on the ground in China, Italy, France, the UK.

The experts, the people with KNOWLEDGE, not just access to the internet, believe that measures need to be taken to slow the spread of the virus, and that failure to do so will be catastrophic for our communities.

This isn’t about politics for me. This is about doing my part based upon the advice of medical and scientific experts.

No one has commanded me to stay home, or to keep my children at home.

I’m doing it because I think it is the right thing to do.

Stay safe and healthy, all of you. Eat your vegetables.