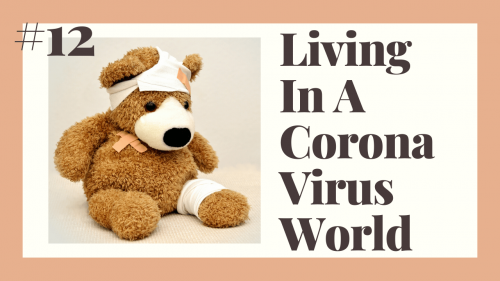 I am still in good health, my kids are doing great, and so far, none of my immediate family or friends have showed any signs of a serious infection (though I think a lot of us have already had the virus and recovered).

As I wrote about yesterday, I have an old friend who made a mistake and is now residing for a short time in the BOP system. I wondered yesterday whether she would be safer in jail than outside of it, if the prison system could effectively quarantine its inhabitants.

And on further rumination, I do think the theory is sound. But unfortunately, I am seeing lots of news that confirms that my theory is just that. A Theory. With no hope of it being put into practice effectively.

The news trickling out from various facilities all over the country is concerning on so many levels.

First, there isn’t enough equipment to protect first responders and health care workers. No doubt that available equipment when it comes online will go to them, and folks in the prison system (guards, cooks, contractors, inmates) will have to awit.

Second, there is no room or protocol for social distancing, aside from the hole, which is apparently so awful that no one would go there willingly. Though, I have to wonder, would that change if people can’t get away from each other any other way?

Third, there is no testing being done in the jails, or very little. There are tons of sick people already in the prison system, and the coronavirus can look a lot like any other regular cold or even flu. A decision to quarantine or to full someone off duty or off the job is being done pretty much based upon “how sick they appear to be.”

People who don’t seem that sick are allowed to keep working, even though we have reasons to suspect that many of these folks are carrying and spreading the illness.

I was hopeful….but given what we are seeing, I have to think that the virus is going to be hitting jails and prisons really hard.

I think that some facilities will go on a strict lockdown. They’ll isolate inmates to their cells or bunks, and give them little opportunities to move about or exercise. They will restrict transmission opportunities, like contact from outsiders, lawyers, and family.

Or….they’ll just lock in large groups, and stop sending people in. Instead, they’ll deliver meals to be spread out and shared by the inmates, as best as they can.

Perhaps they’ll move people in low security facilities outside, to camp in tents in the fields, to reduce the surfaces that need to be cleaned, the close air, and to aid with social distancing.

Ultimately though, it seems like an obvious action on the part of the prison system (at the local and federal levels) is to let people out of the jail so that they can be the ones responsible for maintaining their health, rather than put the burden on the prison system to do it for them.

If it is going to cost millions to acquire equipment, to clean and isolate, to take care of workers and guards who are getting sick because of their work to manage inmates….it seems worthwhile to explore the option of releasing the people that are appropriate to be released.

Is this a crazy idea? Maybe. After all, people are in jail for a reason. Without an argument about the validity or the effectiveness of the justice system, let’s make the assumption that everyone who is in jail right now did something to deserve to be there.

But in a time of crisis, I would argue that efforts need to be focused on the greatest good for the community at large. Spending federal tax money (or state tax money depending on the facility) to house people who are a drain on the system to “punish” them for crimes isn’t the best way to spend our money.

Does that mean I think that the prisons should be letting out dangerous criminals who have done horrendous things and would be likely to reoffend upon release?

But the people in jail (like my friend) who are sentenced to something short, for an offense that is non-violent, in a position where reoffending is unlikely….I don’t see the value at this point of continuing to hold them.

What if prisons released folks who had been convicted of minor offenses, non-violent crimes, who had served at least 75% of their sentence, or who were within 12 months of completing their sentence?

I wonder how many people that would be? And how much in the way of public resources would be saved, which could be allocated to serving the community at large?

This is a community, don’t forget

People might argue that we shouldn’t bother with protecting people in the jails, because they deserve to be there. I hear you. But in the same vein, there are people who work in those systems, who are getting sick because the prison system can’t actually do anything to manage this virus.

You can’t just write off an entire group of people to the virus, because there are still so many people who would be impacted by it. And we don’t live in a world or a country where it is okay to just let thousands of people die if we can do something to stop it, regardless of what they may have said or done in their lives.

If the prison population were to get wind of any sort of policy that would involve not taking care of them…I can’t imagine any scenario where they’d just accept that quietly.

What are your thoughts for how the virus should be handled within the prison system? Let me know in the comments section below.

For more ruminations about living through the pandemic, as well as day to day observations and what it is like to be a stay at home mom during a pandemic, check out the posts in my journal.