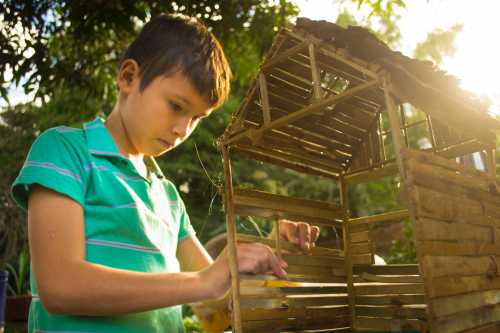 The following is intended for use by parents and teachers of elementary school children. During this guided experience, children will learn various science-thinking skills, including how to develop an effective question and testable hypothesis.  Educational prompts and questions encourage the learner and the teacher to apply the knowledge and skills learned to future occasions.

Example of an ineffective topic:  “Bridges.”  This topic is too broad…too general.  Choose a smaller, more specific topic, such as, “Which bridge designs can support the most weight?”

Example of an ineffective topic: “Which color of bow looks the best with black hair?”  This topic is too subjective and depended on individuals’ preference.  Choose a topic that is objective, such as, “Which color of hair bow is most worn most often in Miss Simpson’s class?”

Ask your child/students to show you their answer to whether a topic is effective or ineffective as a science fair project:

[Questions 1 & 5 are effective, measurable topics.  Questions 3 & 4 are measureable topics, but might need to be modified to state more specifics, such as, “Of water, oil, corn syrup, and rubbing alcohol, in which will an ice cube float?” or “ Of tin, aluminum, iron, lead, and brass, which will rust?”  Questions 2 & 6 are ineffective, because determining the “best” of something is subjective. However, these ineffective topics can sometimes be made to be more specific for use as a science fair project, as described below.]

What is an Effective Question?

Have your child or students decide which of the following (‘a’ or ‘b’) are effective questions, in other words, questions that are objective, specific, and can be answered by the process of measuring:

b)  Which paper towel absorbs the most water?

b)  Does an apple contain water?

b)  How do bean plants grow?

4. a)  Does aspirin keep cut flowers fresher for a longer period of time?

b)  Is aspirin good for cut flowers?

Have your child or students rephrase or rewrite the following questions, so that in order to answer the question, you would have to perform some measurements:

3. Will a magnet pick up rusty nails?

Let Me Tell You a Story:

My oldest son lives in Alaska, so I have had the opportunity to visit during all seasons of the year.  Alaska is a beautiful state whether you visit in the middle of winter surrounded by snow and entertained by ice fishing or in the warmer and sunnier months hiking up mountains and boating across lake after lake. It is always amazing!  However, the warmer, sunnier months can also bring mosquitoes, sometimes jokingly called Alaska’s state bird. One visit was especially ripe with mosquitoes, during which time, I spent trying to discourage the number of bites I was attracting.  At that time, I felt like I was conducting a science experiment with myself as the sole participant: which mosquito repellant would prove to be the most effective? However, after having been stung multiple times before physical and chemical deterrents helped out, the itching of having received bites became my new top priority.

By the way, if you also live in or visit an area where pesky mosquitoes or other biting insects live, the information on anti-itch creams that I used below may give you a jump-start on helping your child or students conduct a similar science fair project.

As I used the different creams, I only used a particular cream on specific parts of my body so I could determine which cream was the most effective for me.  In other words, I used Bactine on my right arm and left leg, Benadryl on my left arm and head/face, and Cortizone on my right leg, neck, and back. (Yes, that does seem like a lot of bites.)  I also applied each cream the same number of times each day. At the end of this experiment, I was able to determine which cream worked best for me and that cream is on my medicine shelf.

If I was able to conduct this same experiment on a number of insect-bitten participants, I would have asked myself to consider the answers to the questions below to incorporate into a science fair project:

Do you have a personal experience that could be turned into a science fair project or experiment?

Before you go, hop over to one of these other great articles from the many Mom Advice Line contributors: