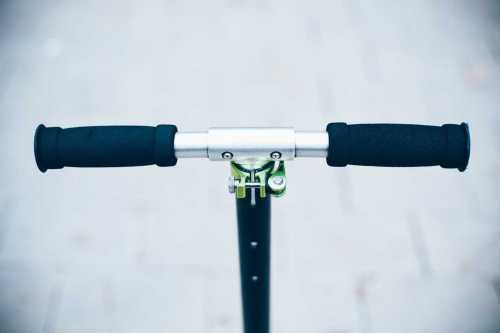 I was super fired up about getting my kids started riding bikes really early. All of my kids were interested and excited to sit on the little plastic scoot-around toys in my house. We had a fire truck with four wheels that was easy for them to climb on (and not fall off). We also had some other random ride-on toys around the house.

Turns out, I was wrong.

At 18 months old, my child had literally no interest in his balance bike (two wheels). I could barely get him to throw his leg over the bike to even stand with the bike between his legs, much less dream of him sitting on it or riding it.

So I decided to try a scooter. I found these scooters that had three wheels. Two wheels in the front, and one in back. The scooters stand up on their own. A child can hold onto the handles, put one foot on the scooter, and then use to other to push himself along.

There is balance involved, especially as you start gliding, or if you want to make turns.

And surprisingly, despite their infatuation with ride-on toys, all three of my children succeeded first with the three wheeled scooter before they ever got interested in their balance bike.

The boys also transitioned from the three wheeled scooter to a two wheeler in minutes, without any balancing issues or drama.

They learned so much about balance on the scooter that it was simple to balance the bike once they got over whatever fear they had of it.

Why was the scooter easier, do you think?

I think the scooter was easier for them because it balanced itself, while the balance bike needed you to put both feet on the ground for it to stand up straight. When you are riding the balance bike, there are multiple tasks: holding onto the handles, sitting on the seat, picking up one foot, holding up the bike and body with the other foot, turning the handlebars to steer, and so on.

With the scooter, the child can simply grab the handles, put one foot on the scooter, and push off. No need to really steer, no need to keep the toy from falling over. Though to get better at scooting along, you have to learn about balance and multi-tasking. Initially, the bar for what you can and have to do is very low.

The scooter does more than you think.

If you’ve never gotten on a scooter as an adult, you should try it. In the beginning, I didn’t realize exactly what motor skills the kids were developing on the scooter. But after I bought a small one and started riding it to keep up with my kids, I realized the benefits.

To ride a scooter with any sort of comfort, you have to build up quite a bit of strength in your core (stomach and back). You also need to build up your leg muscles, because all of that pushing around is harder than they make it look.

After riding my scooter tons over the summer, I realized that I had improved muscle tone in my calves, quads and hamstrings, glutes, and around my trunk area.

I can see why the kids had a pretty easy time on the balance bike, after they had spent a few months on their scooter.

After the first child, I was glad that the kids liked the scooters better than the bikes.

The scooters turned out to be way more convenient than the balance bikes. They were smaller and packed up in the car better, along with the helmets. Bikes just take up a lot more room, and they are a lot heavier. I can easily carry a handful of kids’ scooters and helmets, but the same cannot be said for all the bikes.

Second, the kids can’t go quite as fast on the small scooters as they can once they get going on bikes. This meant it was easier for me to keep up when them while on a scoot/walk.

Third, crashes are pretty straight forward. When the kids crash on a scooter, they go flying in whatever direction, but the scooter is usually left behind. They don’t end up with a foot trapped, like they do with their bikes.

Transitioning to the balance bike and beyond

In hindsight, I think it was a good thing that the kids started with scooters. Once they did get going on the balance bike, they were able to go so fast on it, and they were also able to avoid crashing and other trouble with it because they’d already spent so much time on scooters.

They quickly mastered the art of balancing on the balance bike, putting their feet up on the pegs or cruising with their legs out, held off the ground.

They were not intimidated at all by the pedal bike. My eldest son taught himself how to ride the pedal bike, and just started riding it one day on his own, without me having to hold the seat or anything.

My second son followed suit and they are both excellent on their pedal bikes now at ages 5 and 7.

Pushing one over the other?

I think the best thing to do with the kids is to have one of each, and to encourage the kids to use them both. My daughter is afraid of the balance bike. It is heavier than the scooter, and harder to balance. She LOVES her scooter, and we have great fun all the time with it.

I would love for her to ride a bike, because then we could all ride together. She is the last one who can’t ride a bike yet, and it does hold us back because the scooter just doesn’t go as fast.

But I see parents over doing the encouragement for the bike, and I see kids struggling, pouting, crying, or just finding the whole experience to be a negative one.

I don’t want to have some sort of battle over riding a bike. I want them to love it, like I did when I was a kid. I want to ride bikes while camping, on vacations, or just to kill time with friends on a sunny day.

If your child loves the scooter, great! Encourage her to ride it as much as possible, because she will be building up muscle, balance/coordination, and experience that will translate to riding her bike.

If she loves the bike, great! She’ll be building up all the things she will need to be great on her scooter.

My youngest is getting ready to turn three. I offered her both the scooter and the bike, as I did my boys. She saw her brothers riding bikes and started with the balance bike, but she wouldn’t sit on the seat. Instead, she put her leg over, stood up, and just walked around. There was just something about sitting that she couldn’t bring herself to do.

Then she tried the scooter. And again, like the boys, things clicked really quickly, and within a span of about two weeks, my not even two year old was flying down the sidewalk, totally in control, on her scooter.

She does so well on the scooter that she doesn’t even look to the bike, even though she is almost three, and this is about when the boys transitioned to the bike.

I’m in no rush. Scooters are easier to pack.

Which products did we use and love?

For the scooter, I bought the Y Glider Deluxe (Amazon link), which has been an amazing product for our family. I actually bought it twice. It was a little spendy, about $40-$50, but it has held up great, and not a single thing has broken on it despite more than 5 years of abuse. Seriously, my kids are horrible to it and it has been amazing.

For the balance bike, I went with the Classic Strider (Amazon Link). This product was more pricey ($80-$90) than others you might see out there, but you can adjust the seat and it was very well constructed. It too has suffered a ton of abuse, but I haven’t had to do any repairs or fixes. Very high quality and I’m super happy with it.

I’ve also tried some cheaper scooters, and been unhappy with way the handles get bent out of shape or out of alignment, the way the wheels or other parts rattle, and when parts fall off.

Any additional thoughts, questions or comments about my scooter/bike experiences with my kids? Let me know in the comments section below.