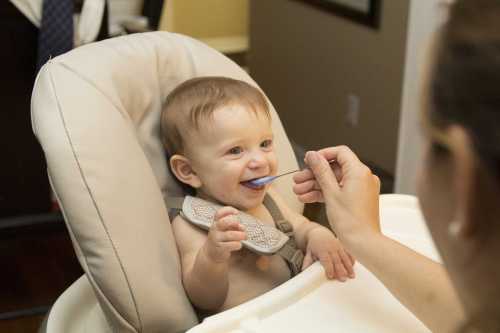 One of the joys of being a new parent is getting to do all the new things with your child that signal she is growing.

Transitioning to solid foods is one of those times.

If you are a nursing mom who has been stuck on a couch or in a bed for hundreds of hours over the last 4-6 six months, the light is now at the end of the tunnel.

Introduction to food is the first step towards your baby’s eventual weaning.

People love to talk about introducing foods, and post pics on Instagram of the food going everywhere.

But no one talks about what can happen when you first introduce solids.

How to Help Baby With Constipation

Constipation is a very real thing, and very painful

At my child’s six month appointment, the pediatrician told me it was time to start introducing food. He suggested rice cereal, applesauce, or bananas.

It didn’t occur to be, but rice, applesauce and bananas are also the same foods that we give to people who have diarrhea.

These types of foods block things up, and slow poop down. This is the opposite of what the baby needs at this stage.

It takes some time for their little bodies to efficiently process the food you give them.

I went home and very excitedly gave my child little amounts of the foods suggested by the doctor.

I introduced one new food a week, as recommended, to watch how my baby handled each new food and for any signs of allergies.

I noticed right away that his diapers changed dramatically. With only a few spoonfuls, the poop became much firmer, and darker.

When my son finally ate a small bowl of food, the poop really firmed up. So much that it wouldn’t come out at all.

I didn’t understand what was happening. I didn’t realize that baby constipation was a real thing. After one day of not pooping, I didn’t think much of it.

After two days, I started to worry a little. On day three, my son was trying to poop, but couldn’t.

He was crying and straining, but the poop did not come out.

I discontinued solid food and just nursed him as much as I could. When nothing helped, I called the doctor.

The pediatrician did not demand to see us. The office took a very hands off approach, even though I was pretty frazzled.

My son was crying a lot and feeling a lot of pressure, but he couldn’t get the poop out. The office recommended that I give Jacob a mixture of apple juice and water.

Funny enough, while apple sauce binds up the poop, apple juice as the opposite effect. I could have also given him prune juice.

Unfortuntely, the poop saga was too far gone, and the apple juice just seemed to make the problem worse.

Now he really had to poop, but there was a really hard plug that he couldn’t squeeze out.

At my pediatrician’s direction, I purchased a children’s enema product, and had to administer it to him.

Doctor’s generally don’t recommend that you start with an enema, and you can actually do harm to a child when administering it.

But he was in real pain and needed real help.

I administered the glycerin enema to him on the changing table (something I never imagined I’d be doing).

It wasn’t difficult, all I had to do was use a tiny tube and insert a small amount of the substance into his rectum.

Within 30 minutes, my son finally pooped. It was a painful poop, and he cried a lot while it was happening, but the poop finally came out, and we all sighed with relief.

People are well meaning when they suggest that you start with rice cereal.

But in talking with other moms, I think it is better to start with foods that you know will help move the food along, rather than slow it down.

Thus, instead of rice cereal, applesauce, or bananas, I recommend the following foods:

Funny enough, all these foods start with the letter P. This makes it easy to remember when you are in the grocery store.

With my second and third babies, I started with prunes.

Then, once prunes were introduced and had been verified to be all good in their systems, I introduced other foods, but stirred in a bit of prunes with each new food.

This ensured that my children would be able to process the food out.

Rather than purchasing prunes as a pre-made baby food, I made it for cheap at home.

I purchased a small bag of dried prunes, then put the died up fruit in a bowl of water. In a few hours, the prunes were plump. I dropped them in a blender along with all the prune soaking water.

They blended up easily. I froze the puree in ice cube trays, and when I needed a cube to mix in with my baby’s food, I always had some handy.

With prunes on hand, you can try new foods with more freedom and less worry about your child’s immature bowel system.

When your baby starts solid foods, watch their diapers carefully.

If you don’t see a diaper on schedule, then you might have a constipation situation developing.

It is definitely much easier to deal with constipation before the situation gets as bad as my son’s did. I think I caused him a lot of unnecessary pain through my simple ignorance.

If you notice that your child is not pooping, consider giving him a few ounces of diluted apple juice.

Even if your baby has never taken a bottle or drank from a cup, he’ll love the sweet taste of the juice and take it down eagerly.

I don’t think its a good idea to give young children juice on a regular basis, breastmilk is definitely better.

But apple juice can help get that poop out, and for this reason, I recommend that you keep some on hand, just in case.

If the constipation gets worse, I suggest that you contact your doctor before taking any more serious evasive action (such as in using an enema).

Get Ahead of Constipation

In general, it is a good idea to avoid constipation in children before it starts. Here’s a list of things you can do when you start introducing food to your baby:

I really do believe bananas are dangerous foods for babies. The fruit is very sweet and easy to eat, so babies will love eating them and demand more.

But bananas are a prime reason for constipation.

I now recommend that parents wait until babies are a year old or older to have bananas, and even then, I don’t recommend that a child has more than one banana a day until they demonstrate that eating bananas doesn’t harm their ability to poop regularly.

Check the ingredients list of the baby food you purchase for bananas and/or applesauce.

It is rare to find food that doesn’t have pureed apples in it. If you are concerned about constipation or struggling with it, make sure that the food you are buying to deal with the constipation doesn’t actually make the problem worse.