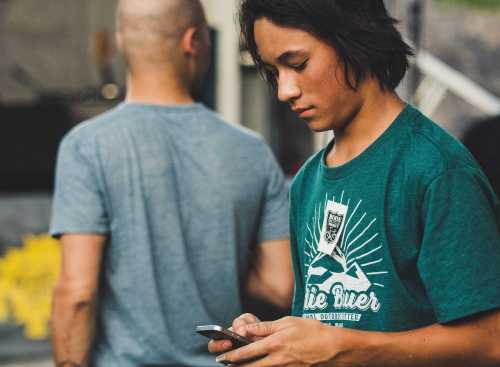 To say that social media has taken off is an understatement. It’s here, and it’s here to stay. But for parents what is troubling is how fast it evolves. For instance, you catch wind of a new app and start using it. Whether you’re trying to be hip or see what your child is up to doesn’t matter. Because your child and their friends will probably be on to the next app before you know it.

It’s all about speed and not leaving a trace. That’s what makes Snapchat so appealing. It’s fast, mobile, and supposedly leaves no trail behind. That’s part of the fun. Other social media apps leave that trail of breadcrumbs for parents to find. But Snapchat has (almost) solved that problem for children and teens.

Since it’s very likely that your child or teen is using Snapchat, here’s a quick guide for parents.

What Exactly is Snapchat?

What makes Snapchat appealing is the fact that “snaps” supposedly disappear. Like other photograph apps, users can apply filters and overlays to photos and videos. In seconds that moment frozen in time is then gone forever. Problem solved, as most would think. But not likely. Screenshots can easily capture the image forever. Like anything online, nothing is ever totally erased.

It all sounds fun, and it is. Kids are always looking for the next best app. Like it or not, they are pioneers in the evolution of online communication. For parents it’s important to realize this while being vigilant. Since there is nothing inherently wrong with Snapchat, look instead at personal behaviors that could indicate other problems. Many times, social media is simply an outlet but not the cause. However, there are circumstances where social media has caused negative impacts in the lives of children. In that regard, Snapchat is no different.

So, remember this: Snapchat is a messaging app that integrates user photos and videos. Snaps automatically destruct after a set amount of time.

Over time, the app has grown to incorporate other features such as news, entertainment, and games. It’s no longer a mere messaging app.

Who Can Join Snapchat

Snapchat is open to anyone over thirteen years of age. Of course, online age verification protocols are not foolproof. If your child is using Snapchat, vigilance is your best choice. Also, consider enabling parental controls on your child’s phone to limit social media usage and functionality of items such as the camera.

Snapchat is no different than other social media apps in the online dangers it can possess. Some concerns in recent years have included bullying and sexting. But as with anything your kids participate in or use, vigilance is the best choice in monitoring social media usage for your own kids.

Many teens may find sexting to be safe on Snapchat. However, this is not the truth. Users can screenshot images. While the images do disappear from the user’s screen, law enforcement may be able to recover the images from individual phones. Why is this a concern? Because anyone with pornographic images of minors on their phone can be charged with child pornography. This is a serious issue that even pertains to minors.

Bullying is another matter that has surfaced on Snapchat. What should be most concerning to parents and teachers is not the method of bullying, but the fact that it is occurring. Addressing the behavior should be the priority. Snapchat has partnered with the Crisis Text Line for its users. That resource is available to users who text KIND to 741741.

So, you want to monitor your child’s activity on Snapchat? Think again before asking the app to release that data. As a matter of fact, Snapchat will not release any user data. This has been tried and tested in the courts.

As with any online activity, privacy is always a concern. Discuss with your children the rules for keeping personal information secure online. Even though it’s unlikely to happen, any bit of personal data can give opportunity to online predators. Again, it’s not an issue just with Snapchat. Instead of going after the app, identify your concerns with your child. In the end it’s best to have an honest conversation about online safety.

In similar fashion to other app developers, Snapchat takes safety seriously. Fortunately for parents the app provides a support guide to parents on its mobile and desktop platforms. All issues related to online safety and privacy are covered. After the past negative coverage the app received, it seems to have made strident efforts to provide a secure, online environment. As such, Snapchat has made it easier for parents to understand the app and how it works.

That being said, no third party can protect your child better than you can. As always, maintain vigilance over your child’s online presences. Be open to discussions with your child about social media usage. Then let them know the consequences of poor online etiquette. Set aside issues of danger and discuss how college admissions offices and potential employers will view their past online behavior. Moreover, how they behave online today could greatly impact their future.

Finally, always do your research. Snapchat, like other social media apps, is always evolving. Despite what you know today, stay up to date with app updates. This way, you can follow the trends as they happen. Of course you’ll never set the trends like your kids, but you’ll never be far behind.

Before you go, check out one of these other great articles from our many Mom Advice Line contributors: