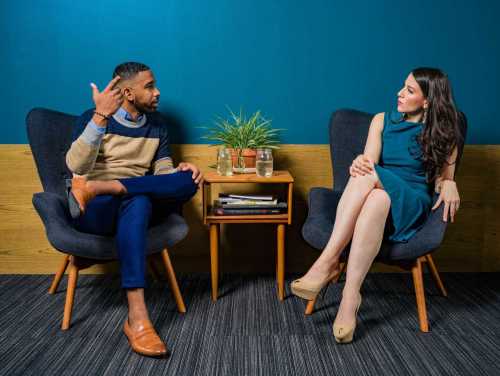 I was busy working on another project this morning when the doorbell rang. Looking at the time (around noon) and the fact that it was a weekday, I was fairly certain that it was someone from one of the various local churches or religious organizations (LDS, Jehovah’s Witness, etc).

My neighbors usually knock, and my mom just comes in the front door.

I was at my computer in the back room, and I could have easily just ignored the bell.

But I saved my work, and went to answer the door.

Opening the door revealed two nicely dressed, gray haired ladies, who were probably in their mid-70s. They were pleasant, and had their tablet cued up.

Internally, I groaned. But I pasted a smile on my face.

I greeted them, and then braced myself for the pitch.

They were Jehavoh’s Witnesses. And they wanted to tell me about God.

And it wasn’t honestly too different from any of the other pitches. You could also see that they were braced for whatever I would say in return, and you could see from their demeanor that they were prepared for negative remarks, for derogatory statements, even for vitriol.

Or a slamming door.

But I didn’t do or say anything negative to them. I listened to them, let them finish what they had to say, and then spent about five minutes engaging with them in some real, honest conversation.

The things that I believe (or don’t) aren’t going to be changed by a pamphlet. Or a random visit to my doorstep.

But here’s the thing.

I respect these people for what they are doing.

Maybe we don’t agree on what we believe. (we don’t)

Maybe we don’t agree on the way that they spread their message. (we don’t)

But I grew up with many families who believed things that I did not share. And we were FRIENDS. Great friends. Friends that I have retained to this very day.

In a divided world, where the chasm between beliefs seems to grow wider and wider, it is important now more than ever that we are able to talk to each other and work together.

Even if we can’t agree.

I guarantee you that even people whose beliefs about God or religion or the price of potatoes can find common ground. On something.

With the ladies outside my door, we talked about the scripture they presented to me, and when they was through, we agreed that compassion and love for our neighbors and other humans was important, and worth fighting for.

We agreed that it was worthwhile to fight for love, and to be able to talk in a civil manner with out people about the things we disagreed about.

We talked for about five minutes on my doorstep, and I spent the entire time shivering because I hadn’t thought to put on a coat.

When I answered the door, the women looked as though they were braced for a bomb to explode.

When they left, they walked away smiling, chatting quietly as they walked towards my neighbor’s house.

Why did I waste five minutes of my day to talk to these folks who weren’t going to change my mind?

I took the time to talk to these missionaries and others who come to my door because I have some beliefs of my own.

I believe that other people are important.

I believe that these folks do the work they do because they care about other people. They walk around looking to share their beliefs with others because they actually care about what happens to the rest of us.

I don’t have to subscribe to their version of what will happen to me if I don’t join up with them to respect them for their efforts.

How many people out there in the world sit in front of the television every night after work, doing nothing to improve the world or their lives in any way?

How many people spend more hours on Facebook, Instagram, or Tik Tok than they do working to improve themselves or the world around them?

I answer the door and talk to these people because I respect them. I hate that people treat them badly, and I hate that they have to build up courage to knock on a door.

I have the power of my own. I can use it to make people feel good, or bad. I can use it in a positive way, to build people up, or take people down. I don’t know if those ladies had a single other person open the door to them today, or if anyone was nice to them.

I had the power today to impact two elderly people who were on their own mission to improve the world.

I believe that this world would be a better place if we could all treat each other with kindness and respect, even if we don’t agree on the big things, the small things, or anything.

I took five minutes of my day today, to give 100% of my time and attention to these two human beings. By tomorrow, I will have forgotten that I spoke to them, or what I had to say to them.

But how much you want to bet that they will remember me? That they will talk about me? About how I listened to them attentively, respectfully conversed with them, said nice things to them, and was kind to them? About how we connected for those few minutes, about the shared fact that we are human?

You might say that I wasted those few minutes.

If I could have a lasting, positive impact upon members of my community in just five minutes, I would say that it was time well spent.

I think if everyone took five minutes out of their day (just five, though more would be awesome) to connect with another human being in a kind and respectful way, this world would be a much better place.