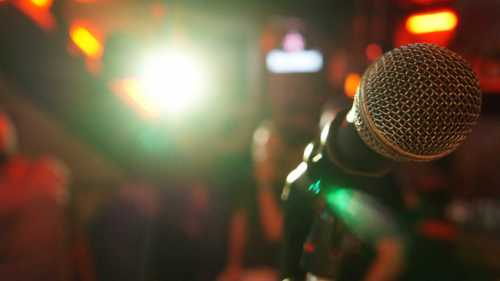 For decades in America humor has been a unifying bond. A good laugh has the strength to break down tense subjects that surround us like gender, race, ethnicity, religion, or sexual orientation.

While humor can be expressed in multiple forms, stand-up comedy has had a dramatic increase in popularity in recent years. Comedians can shed light on the controversial topics or day to day issues.

However, stand-up comedians tend to use vulgar language or explore very mature themes. While they may have great acts, they may not be right for family night around the TV. I asked one of my long time friends who has a lot more experience with stand-up to put a list of “clean” comedians together.

Then you know what I did? I took my own advice (about pre-screening that follows) and I checked them out. This article is the result.

We recommend that you screen all comedians, even those who tend to perform clean acts, to make sure that the style and content is appropriate for your children. In a lot of cases, comedy specials (like what you can find on Netflix) are recorded live. Even comedians who generally avoid cursing will slip and let one fly in live shows (where they might not in scripted CDs or other more prepared recordings).

Remember, even comedians who are mostly clean in their performances are performing for an audience of adults, not children. Even clean shows will contain jokes and other content that are aimed to entertain adults.

If you have young children who are not even ready for discussions on mature topics (dating, relationships, physical relationships, bodies, politics, government, marriage/divorce, etc), I’d recommend that you avoid comedy for your kids until they are a bit older. If mature topics are something you want to avoid in general for your kids, comedy is probably something you won’t watch with them.

In all cases, if you are concerned about the content, watch it first on your own.

Bio: If you have never heard of Jeff Allen, he’s the guy who made the term “happy wife, happy life” famous. He performs jokes material about growing up in the 50’s and 60’s, being married, raising kids, and the issues that face the country.

I took to YouTube and started watching some of his work. What I found is that his routines are pretty clean (meaning not full of swearing or rude pantomime). But his jokes about aging and marriage would probably go over the top of the heads of most young people.

Here’s a good example if his work:

Bio: Chances are you’ve heard of the self-deprecating Jim Gaffigan. Gaffigan is one of the funniest family men working today. (Ever heard his line: “HOT POCKET”).

Raised in Chesterton, Indiana, he’s a pro when it comes to family-friendly material. Gaffigan comes across as a buffoon, and loves to poke fun at laziness, eating, and the challenges of married and raising children. In a world where most comedians these days seem to be focused on trying to one-up each other to be the dirtiest or the most daring, Jim Gaffigan get his laughs without being crass.

I found several of Gaffigan’s stand-up specials on Netflix. I watched a few of them, and found him to be dry yet strangely compelling. His routines were free of swearing (thankfully) and funny. Gaffigan talks a lot about being a dad and about his family. Yes, other adult topics, similar to Jeff Allen. But I don’t object to him for older teens.

Bio: Brian Joseph Regan is an American stand-up comedian who uses sarcastic, and self-deprecating humor. He has been on the road for years. His fans glow about his genius as a comedian. Regan’s humor is fantastic, but critics say that his talents are more fully realized when you see a live performance. His delivery and physicality will help you understand the absurdity of everyday experiences (he seems to like to yell a lot).

I cued him up on YouTube. Like many stand-up shows, the set was performed in bar (with the bar set up and alcohol glasses/drinking) in the shots. The clips that I watched didn’t show him cussing or talking about anything gross or sexual. I just just didn’t actually find him to be that funny. Maybe I just need to see him in person…?

Bio: Tim Hawkins is explores the hilarious parts of humanity through spoken comedy and just the right song for the occasion. Hawkins is an American Christian comedian, songwriter, and singer, best known for parodying popular songs such as Carrie Underwood’s “Jesus, Take the Wheel”, Kansas’s “Dust in the Wind”, and “The Candy Man”.

His talents combine for a high quality material involving the joys and perils of marriage, raising children, and church. If you need validation for his skills on the stage, just check out his escapade about how he intends to make his funeral fun and exciting for all.

I found a ton of clips on YouTube (posted one below). He seems to be a really talented singer, and I found him to be quite engaging on stage.

Bio:  Michael’s became a comedian on a dare in a Grand Rapids, Michigan movie theater. The projector suddenly stopped working, the house lights came on and when prodded by a friend, Michael jumped in front of the large and grumpy crowd and began to perform.

When the theater manager tried to usher him out the audience demanded he stay. This is when the world discovered his gift. Michael Jr. has a natural talent for making the trivial pursuits of day to day life seem hilarious. Whether it is childhood, marriage, church, or politics, he has a brilliant way to flip it on its head and make it laughable.

I checked him out on YouTube, and found his routines posted to a lot of Christian YouTube channels. If that doesn’t give you the thumbs up that the routine is free of swearing or inappropriateness, I’m not sure what would.

Bio:  Anjelah Johnson spent time as an Oakland Raiders cheerleader and as a cast member for the long-running sketch-comedy series MadTV. She is a popular comedian known for her edgy yet clean material. She discusses everything from her time as a cheerleader to her involvement in the church. She also incorporates her Hispanic heritage/upbringing into a lot of her material.

Bio:  Robert G Lee is well known in the entertainment industry as Hollywood’s top warm-up comic. He earned this title through featured appearances in over a thousand episodes of TV Shows like The Drew Carey Show and Becker. He keeps audiences on their toes with hilarious routines and improvisations in between scenes and costume changes.

The clips that I watched were funny and clean, not something that I would be worried about having on while the kids are around. Heavy on comedy that will make parents laugh but go over kids’ heads.

Bio: There are fewer female comedians than male comedians. To be both Mormon and female is just about unheard of. In Jones we find both. Jones is an American comedian and podcaster.

Ever heard of the American documentary film Meet the Mormons (2014)? (Jones is an on-camera narrator). She hosts a podcast called Couple Friends, and a former regular on the Alison Rosen Is Your New Best Friend podcast.

Bio: Ryan Hamilton is an American stand-up comedian who uses self-deprecating humor. He is known as a clean comedian and his material focuses on his own experiences, including his single life, skydiving, hot air balloons, and his huge smile. (REALLY HUGE smile)

Jerry Seinfeld has used Ryan Hamilton as his opener for a while now. Not only does he command an audience, but Hamilton executes his material incredibly well. Ryan is not only relatable, but can make people of any age smile.

Like Jenna Kim Jones, Hamilton is another Mormon comedian (one of the few) making it to the big time.

The clip I found was clean of swearing, but involves adult topics (such as dating, appearance).

Bio:  Henry Cho is an American stand-up comedian. His work can be heard nationwide several times weekly on XM Radio’s Channel 151, and many other popular radio shows. He is unique among comedians – an Asian man with a southern accent. Cho hosted NBC’s Friday Night Videos for two years and has had guest roles on many network sitcoms.

The clip I listened to was clean, and I didn’t hear anything objectionable for the kids. I think the jury is still out on whether he is actually funny, but I heard enough that I’d be willing to watch more of his material when I have some time.

Bio: If you like shorter skits, Netflix has a new show called The Standups, with half hour sets. They showcase a handful of great comedians including Nate Bargatze.  Bargatze may be one of the next big comedians of our time. He’s hilarious, relatable, and his jokes are some of the best currently being written. His laughs are massive and you can see it all on display on The Standups.

When I searched him on YouTube, I found that he has appeared frequently on Jimmy Fallon’s late night show (those performances have to be clean enough for regular television). I found another non-late night performance and found it to be pretty clean of swearing and of adult topics.

Bio:  Iliza Vie Shlesinger is an American comedian. She won NBC’s Last Comic Standing in 2008. Next, she went on to host a dating show called Excused and another comedy/game show called Separation Anxiety.

In 2017, she briefly hosted her own late-night talk show called Truth & Iliza on Freeform. Iliza Shlesinger probably has the edgiest and highest energy specials on this list. While it may be a little fast paced for young children, her brand is smart, pro-female and relatable to Millenials. Her fans adore here and often show up to her shows in costumes of characters from the previous special. Her creative hash tags throughout the performances will have you cracking up.

I checked her out. I thought she was entertaining. For me. But not for my kids. She tells great stories about her life, including going out and drinking with her girlfriends, dating, and hooking up. Some cussing, but not as much as some comedians. Great artist, but not for my kids.

Bio:  John Edmund Mulaney is an American stand-up comedian, actor, writer, and producer. He is best known for his work as a writer on Saturday Night Live and as a stand-up comedian. As far as stand-up specials go, John Mulaney’s joke writing is on point. Mulaney’s sharp dress and good looks will come across as wholesome.

I checked him out. He has some slightly edgier material like religion, however his delivery is mostly family friendly. He does swear occasionally however, but his shows aren’t full of it like you see in some performances. I thought he was pretty funny, and if you can handle the occasional swear word around your kids, this might be a good fit for your family. But if it has to be 100% free of swearing, then he’s not a good fit.

Thanks for stopping by! Before you go, check out one of these great articles written by one of our many wonderful Mom Advice Line contributors: