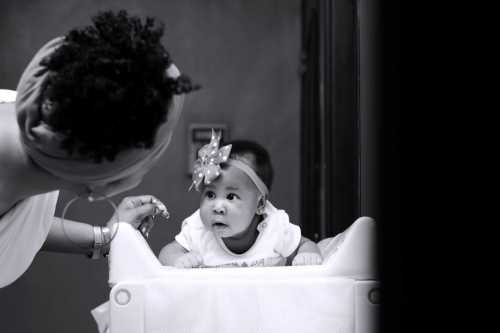 This is a great question. As a mother of three children, I’ve never really thought about this all too much. How many wipes does my baby use in a year? I mean, we have more than one child in diapers in the house (or we did for a while). We were blowing through wipes like it was nobody’s business.

Let’s think back, and see if we can come up with the number. Unfortunately, I didn’t keep a running tally of either the number of wipes used per day OR the number of packages of wipes purchased. If I had been consistent in purchasing wipes in bulk from Costco (like on a monthly basis) or ordered from an automatic delivery service, it would be easier to figure out.

I’ve got some time….let’s see if we can figure it out.

Before we go down the road of just multiplying the number of days in a year by an estimate of the number of wipes, we have to figure out how many diaper changes were done in a given period. And here’s the thing-diaper changes aren’t consistent throughout the first year.

Anyone with a newborn knows how many diaper changes there are. Further, the number can vary widely. I would also point out that first time parents are more likely change diapers more frequently with the first baby. There’s something novel about changing those first diapers as soon as the package is delivered. You are still working to earn your parenting laurels. Once you’ve had a few children, the herald of the arrival of another load to change doesn’t always inspire immediate action, especially if you are in the middle of cooking dinner, mediating sibling rivalries, or trying to juggle work.

Plus, by the time you’ve had more than one child, you understand how much diapers cost (a lot). You also understand where all those diapers go. You might do your best to get the absolutely MOST out of each diaper before it goes into the trash.

(I may or may not have done this, I admit nothing.)

Diapers in the first month

If my memory serves, I would say that the most diapers used per day occur in the first three months. A newborn baby has the stomach the size of a grape. Said baby nurses frequently, because as quickly as that grape fills up, it empties. Each feeding is almost always accompanied by a soiled diaper.

It is common for newborns to go a week or more without pooping. Did you know that? Yes, it is true. Parents freak out when there’s no poop coming out. Breastmilk is incredibly easy for babies to process, and there’s very little in it that babies can’t use. So long as baby is peeing, the pediatrician will pat your new-parent head and send you home.

Unfortunately for me, my children swung to the other side of this discussion. Rather than blessing me with days free of yellow-mustardy breastmilk poop, I received the opposite. They nursed constantly, and then pooped constantly. Seriously, almost every nursing session was followed by a diaper change.

We discussed above that the number of diapers in the first month are going to depend upon whether your child poops consistently or not. I can only give you estimates from my personal experience, so take a look at what I conclude and remember that it can be a lot less, or even a lot more.

In the first month, I would estimate that we changed diapers 12 times a day. I would also estimate that at least 8 of those 12 were poops, but in some cases, there were 12 poops a day.

I would also estimate that 2 wipes per poo were used, although there were definitely some that required more. Or a bath.

This doesn’t include wipes used for spit up or other disasters.

As baby few, the number of poops a day definitely decreased. The tiny stomach grew quickly, allowing for more milk at one sitting. There were fewer feedings overall, longer periods of sleep, and less excitement about diaper changes. Overall, months 2-6 were fewer diaper changes.

I would estimate that there were 8 diaper changes a day in these months, and 1-4 of these were poops. I’ll estimate 2 poops a day, times 2 wipes a poop, times 30 days. This is only 120 wipes a month.

In month six, most pediatricians recommend that parents begin feeding babies solid food. This transition can occur earlier or later, depending upon the doctor, the excitement of the parents, and the readiness of the child.

Signs of a baby ready for foods include sitting up on her own, fixation on your food, watching you carefully while you eat, trying to grab your food and put it in her mouth, and others.

Some pediatricians will give you the go-ahead after four months, but others will ask you to wait for a solid six months.

As a parent, I think there is a ton of excitement with the first baby to get started on solid foods. It is a sign that baby is growing up! Everything is new and different and exciting. Parents may push to start early.

As a second and third time parent, the excitement about starting foods is decidedly less. In fact, with my third baby, I waited as long as possible to introduce solid foods.

Why would I do that?

The poop changes when children begin eating food. Breastmilk poop is really easy to deal with. It barely stinks, and there usually isn’t gobs and gobs of it. Of course, you have blow outs and explosive episodes. But it doesn’t really resemble grown up human poop.

But when you add solid food to the equation, it changes.

It starts to smell. It gets firm.

And the;re are more wipes needed to solve the poop.

On the upside though, after solid foods get started, the number of poops per day goes down in my experience. My children have also been consistent poopers, sometimes going twice or more.

For the purposes of this calculation, let’s assume 1 poo per day, time 3 wipes per poop, times 30 days. That’s 90 wipes per month.

Is that all! 1620 wipes? I swear that we used WAY more wipes than that in year one. Unfortunately, everything was such a blur in the first few months. Truthfully, I didn’t keep track of hardly anything if I didn’t need to. I counted the number of diapers to be able to tell the pediatrician how much my baby was eating. But I definitely didn’t track all the wipes used to wipe messy faces, sticky fingers, and clean up messes.

Do you keep track of how many wipes you use?

If so, give us your estimate in the comments. Thanks everyone!