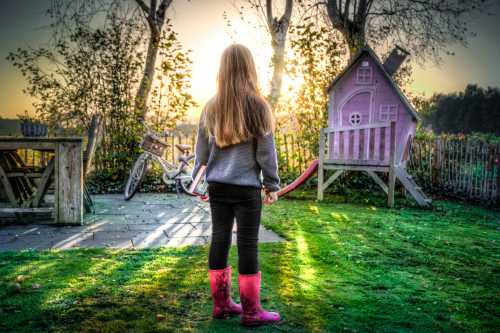 I’m writing this post from outside. If you are a parent and spend any time on Facebook at all, you will have seen many articles coming through your feed lately about the importance of getting kids outside play time. I have seen articles that talk about the recommendation for outside time being between four and six hours a day for children. The benefits from spending that time outside include development of physical ability, strength and balance, but also to develop other soft skills such as emotional maturity, leadership creativity, and intuitiveness.

Do I get my kids outside 4 to 6 hours a day? I like to think of myself as someone who works hard already to get their kids outside and away from screens. In my house, we don’t have a television. I don’t give my kids tablets or laptops or cell phones for the most part. We might watch one cartoon a day, but in any case, total screen time for a child per day is no more than an hour, and often much, much less or even none.

But even with these efforts to reduce screen time, during the school year I’m not anywhere near getting them outside 6 hours a day, unless we are doing some things like camping where there is no ability to go inside.

Let’s talk about my current schedule for my daughter who is two years old. In the morning we get up and are focused on getting the boys, who are 5 and 6, all ready for school. We take them to school and then get home at about 9. From then, for about an hour, she and I will do chores inside, such as doing dishes, vacuuming, sweeping, and folding laundry.

After chores are done, from 10 to about 11:30, we try to do something outside, such as taking a walk, going to the park, or playing outside in the driveway.

Then at 11:30, we come inside for lunch / snack and some milk, and then she goes down for her nap bu about noon. This nap last anywhere between an hour and 2 and 1/2 hours. During that time while she is sleeping, I focus on other tasks that need to get done when I don’t have kids at home such as working on the computer, cleaning, performing home maintenance or other tasks that are unsafe to do around kids. I also use this time to schedule conference calls or other phone calls where it is not professional to have kids sparking in the background.

If she has not woken up by 2:30, I get Hannah out of bed and then we go and get the kids from school. If the weather is good, there is a park next to the boys’ preschool and we will go there all together for about an hour.

But in any case, we have to leave the park by about 4:30 to get home to have enough time to make dinner and then eat dinner and wind down for bedtime. After we get home from school or post-school activities, there is usually about an hour’s worth of time where the baby can play outside with the boys. She is not old enough however for me to leave outside on her own, because she does not yet understand but she has to stay near the house and stay out of the road.

For this reason, when it is time to make dinner, I have to bring her and the boys inside or into the backyard while I cook. We usually have dinner on the table at about 5:30, and then by 6:30 we have to start bedtime wind down routine.

In a good day when the weather is cooperating, my toddler will spend between two and three hours in a day outside. This is much less time than the four to six hours recommended.

Looking at our current schedule with school, and chores, it is hard for me to see how it is that I can get her outside more without giving up on doing other necessary tasks such as cleaning house, working, and cooking.

How to make changes to her schedule to get more outside play time?

But let’s think about it. Is there a way to squeeze out another hour of outside time for her into our day? What I could do in the morning if the weather is good is, instead of doing chores after we drop the boys off at school, she and I could immediately go outside. This would mean that I would lose an hour’s worth of cleaning or chores, but I suppose that could be made up at other time. This would put her outside from about 9am until 11:30am, and if she gets another 90 minutes after her nap sometime, I’ve managed four hours per day.

I could also try and do more of Nora’s napping time outside, by maybe trying to take a walk and hoping that she falls asleep in the stroller. (Apparently even sleeping outside in the stroller counts towards outside time.) I am leery of doing this though, because her nap schedule and routine is so solid that it isn’t hard to get her to sleep in her crib now and I don’t want to mess with it.

Another option would be to make dinner ahead of time, either on Sundays by batch cooking or by throwing things into a slow cooker so that the amount of time spent inside preparing the evening meal was reduced after school.

In any case, with our current schedule, there’s going to have to be some sort of compromise in order to facilitate getting my two year old outside four to six hours a day. Maybe this means that the house isn’t as clean as usual, or maybe some things, like this blog post, have to be done at the same time. Maybe I try to do my conference calls outside from the park and walk away from screeching and screaming kids during important parts of the conversation or use the mute button.

I’m going to have to work on this for her. I’ll post a follow up to my personal blog in the future.

But in any case, I don’t think anyone can deny that getting kids outside is good for them. In my own experience, I see the difference everyday in my kids when they play outside versus when they are stuck inside. Their attitudes are generally better, they are happier, and I see less fighting over all. They are also much easier to put to bed and they fall asleep more quickly.

But what about the boys? Do they get 4-6 hours a day outside?

As for my boys, they are in all day Montessori preschool and kindergarten. I drop them off at about 8:30 and then I pick them up between 3 and 3:30. I know from their school schedule that they get recess multiple times a day, at least three times outside for 30 minutes. Sometimes more.

I think I could safely say that at school, they get at least 90 minutes of outside time a day, just about in rain or shine. But how to squeeze out another two and a half hours of outside time for them before or after school? I don’t see that during the school year that this would really be possible for us. I don’t have any control over their outside time at school, and there is only so much time in the day after school to play. Putting them to bed later at this age (5 and 6) is not an option. I don’t want to mess with their sleep schedule or routine during the school year.

During the summer, 4-6 hours of outside time for the boys is super easy. They head outside in the summer before breakfast, and sometimes get four hours in before noon. We eat most of our meals and snacks outside, and most of our away from home activities involve being outside (outdoor pool, bike riding, hiking, camping, trips to the river/lake, etc).

Perhaps I can look at 4-6 hours a day over the course of a year and just cram as many of those hours into summer.

Looking ahead to make room for outside time

Looking ahead, I think I can do better for the boys as far as outside time goes. This fall, our school situation is going to change. I currently drive the kids to school, and that takes between 20 and 30 minutes one way. I could see next year and in yours future, that we will have extra time because that drive time is no longer going to be necessary. The kids will be able to walk to school most mornings, and won’t be stuck in the car during that time.

They can sleep a little later and maybe stay up a little later, and get more outside time as a result of the shifted schedule. We can also leave the house for school a little bit early and take a roundabout way to get there. We can do the same on the way home after school as well. Hannah will be dropping her nap soon, and that will free up more time in her day to spend it outside (though I will struggle to work as I did before).

With school, for the boys to get four hours a day outside, we can get 15 minutes walking to school, another 15 minutes walking home, and I hope they get at least 60 minutes outside at school due to recess. That’s close to 90 minutes before getting home from school. Then, if I can just get them outside after school until dinner time (from 3-530), that’s a total of four hours.

As with everything, make sure you approach outside time reasonably

I don’t think people should be freaking out if they can’t get their kids outside 4-6 hours a day, every day. But overall, for many families, the amount of time their kids spend outside is dismal. Sometimes not even an hour a day.

If you are thinking about making changes to get your kids outside more, start with small changes that can earn you 15 minutes here and there. Long term adjustments take time, sort of like diets. If you, all of a sudden, commit to keeping your kids outside six hours a day no matter what without ramping up into it, you aren’t going to be able to continue that schedule, because the rest of your life won’t have had a chance to adjust.

I need to keep working on making better use of my mornings outside for my daughter. If I commit to working from my phone, laptop or doing calls on walks, I could probably get a lot more time logged.

Before you bounce back, check out one of these other great posts from our Mom Advice Line contributors: