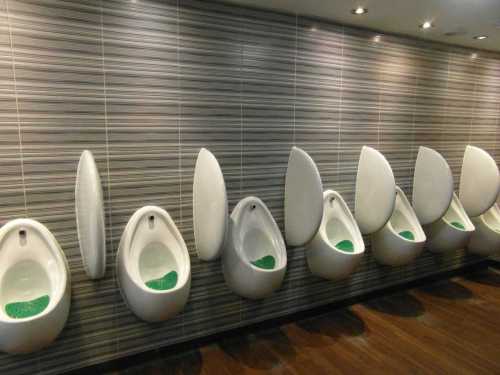 Yes, I admit it. I’ve cleaned the toilet with Ajax or other cleaning containing bleach and then peed before flushing it.

But when I heard about the chemical reaction caused by mixing ammonia and bleach, I realized that maybe I was creating my own toxic gas by peeing into bleach.

So I decided to look into it a bit more….(imaging myself sitting on the toilet while noxious and potentially deadly fumes waft up (not created by the usual source) was a bit unsettling).

What is the big deal about mixing bleach and ammonia anyway?

When bleach and ammonia are mixed, the two chemicals react, and a deadly chlorine gas is the result. The gas can irritate your eyes, respiratory tract, and skin. The gas is noxious enough that it was used as a chemical weapon during World War I and II. (Heard of Mustard Gas?)

People accidentally mix bleach with ammonia on a regular basis, often without realizing it. People use bleach to clean up animal urine, thinking to really clean, clean up that pee spot so that the animal won’t return there to pee again. It is common to wash cloth diapers or peed on clothing with detergent containing bleach. Others might clean a sink with bleach, and then soon after, dump out another cleaning containing ammonia, or to use sponges for both bleach and ammonia projects.

Not Deadly All The Time

Obviously people aren’t dying every time they accidentally create chlorine gas in their homes. If that were the case, it is hard to imagine that bleach would even be sold in stores. In most cases, we aren’t using the bleach of the ammonia (in the form of urine) in a sufficient concentration or amount to do us much harm.

In fact, a lot of us are probably mixing up urine and bleach on a daily basis. If you live in a municipality that treats its drinking water with bleach, you’ve probably mixed up pee and bleach multiple times a day for many years, without issue.

The primary reason that bleach in the drinking water isn’t an issue is probably similar to why the components in urine aren’t an issue either. Water from the tap, even treated with bleach, is mostly water. Urine, too, is mostly water (about 95% actually). There just isn’t enough of the troublesome chemicals in either liquid to do much damage.

Further, while people like to say that your urine contains ammonia (because of the smell after a while), that’s not necessarily all of the story. When you pee, in most cases, right then and there, your pee doesn’t contain ammonia.

Instead, your pee contains urea, which is a byproduct of broken down proteins. Urea can be broken down further into ammonia, which is generally the cause of the ammonia smell you observe if you miss that someone or something peed somewhere and that pee wasn’t cleaned up.

So will I create deadly chlorine gas if I clean a toilet with bleach?

No, it is really unlikely. One, because your urine is mostly water, and it is mixed in with a whole bunch of water in the toilet bowl. Two, because it is unlikely that there is any ammonia to speak up in your urine at the time it leaves your body.

Can urine be used to create chlorine gas?

Potentially. If you allow urine to stick around after it leaves the body, the urea in it may break down further to ammonia, and then mix it with bleach, you might create some chlorine gas.

The thing is, urine is just so dilute with water, that even if you were able to cause that chemical reaction with the small amounts of ammonia in stale urine, it probably won’t be in sufficient quantity to do any hard.

Now, I wouldn’t recommend testing this out, but this is my best guess based upon the science.

Can I create mustard gas with urine and bleach?

No, there is a lot more to mustard gas than bleach and urine. Sometimes I wonder though when I walk into the bathroom after one of my kids has exited without turning on the fan.

Can I clean pee spots on the carpet with bleach?

I say yes, you can, although I am not sure I would recommend it. Bleach is a pretty noxious chemical, and using in on your carpets or other flooring if you are not careful can damage the surface or leave spots. Certainly, you might prefer bleach damage to pee spots, but you might have better luck with dish soap and water first, or maybe even baking soda and peroxide and dish soap, before resorting to bleach.

If the pee spots are old (or smell like ammonia), you might consider avoiding the bleach and trying vinegar instead. While it does seem unlikely that there is really much of a danger of cleaning a small amount of old pee with diluted bleach (please don’t use straight bleach on anything, holy cow), there are several poison control centers that recommend against it.

Regardless, whenever you use bleach (chlorine gas or not), I recommend that you vent the space (open the door, open windows, or turn on the bathroom fan) to avoid breathing in the bleach fumes.

How will I know if I have created chlorine gas?

If you have created chlorine gas, you will smell it. It will smell a lot like bleach, but not quite. It will be sudden, strong, and irritating. The gas is yellowish-green.

If you observe the signs of chlorine gas, don’t stick around to deal with it. Gather everyone in the house and get them out. Or leave the area where the gas is.

Chlorine gas sinks, so try to get above it, if you can. Carry children, for example.

If you think that the exposure is a serious one (serious symptoms), then call for help or go to seek care right away. You can always call poison control for advice as well US: 1-800-222-1222).

What are the signs of chlorine gas exposure?

People who are exposed to chlorine gas may experience any of the following:

Is peeing on bleach dangerous?

In summary, it is not dangerous to pee on bleach. Not as far as creating a toxic gas. However, I wouldn’t want to get any splash back from the bleach filled toilet bowl onto any delicate skin that might be hanging over the water. So for this reason, I would recommend that you flush before using the toilet after cleaning it.

Before you go, check out another article from our community of contributors that you might also like: